The Museum Of The Institute Of Veterinary Pathology 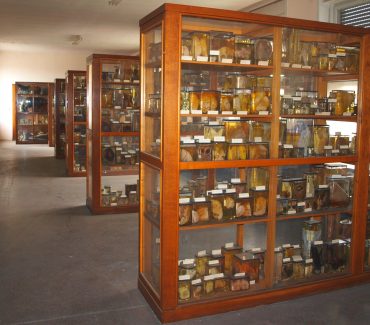 The museum collection consists of about 3000 preparations of pathological changes to the organs of various animal species, human organs, concrements, foreign bodies and freaks.  Another interesting feature of the museum are animal diseases that have been eradicated. In terms of its wealth of exhibits, the museum may be designated as one of the largest pathological anatomical collections in Europe, not only in terms of quantity but also in terms of the many rare cases.  This abundance of pathological anatomical and histological materials has been gradually built up by expert veterinary pathologists, who created the foundations for pathological anatomy and histology at the Veterinary Faculty in Zagreb, and also built the foundations of the faculties founded later in Sarajevo, Ljubljana and Belgrade.  The founder of the museum, and also the first head of the Institute of Veterinary Pathology, was Prof. Dr. Sc.  Ljudevit Jurak. The oldest exhibit dates from 1923.